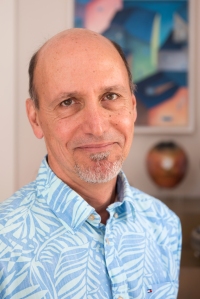 Scott Tubby’s hands have been shaping clay for more than forty years and painting canvases full time for fifteen.

“I feel fortunate to have worked as an artist for most of my life. To be able to spend my working days doing something I’m passionate about is a gift.”

In 1980, he was the first potter to combine the technique of burnishing with saggar firing to produce the style of work that has brought him acclaim from an appreciative public. A review of his work in 1986 from The New Yorker put it this way, “the subtle range of colors and the delicate stylized necks distinguish them from any other ceramics we’ve seen.”

During the 1980’s and 90’s, his pottery won numerous awards and was sold exclusively through fine craft galleries across the US including such well known retailers as Gumps in San Fransisco, El Prado Galleries of Sedona and Sante FE and The American Hand in Washington DC. Tubby has been an exhibitor in many prestigious fine art and craft fairs such as the Smithsonian Craft Show, the Coconut Grove Arts Festival in Miami, the Cherry Creek Arts Festival in Denver and the ACC Craft Fairs in Baltimore, Atlanta and San Fransisco.

Feature articles about his pottery have appeared in Ceramics Monthly and Studio Potter. Two examples of his burnished work were included in the book Best of Pottery by Jonathon Fairbanks and Angela Fina published in 1996. Today his pottery can be found in numerous public and private collections throughout the US, Finland and Japan including three pieces in the Smithsonian Museum of American Art.

Scott is a firm believer in giving back and has enjoyed sharing his knowledge of burnishing, saggar firing, pit and raku firing in workshops at craft centers and schools on the east coast and in Finland and has taught foundation and advanced courses in ceramics at the college level. He is still producing his classic pottery forms in clay but on a smaller scale.

Painting has become Scott’s passion as is evidenced in the gallery pages that follow. Since graduating from the Finnish art school, Taidekoulu Maa in Helsinki, he has had two successful solo exhibitions in Helsinki galleries and his paintings have been exhibited in group shows here in the US and in Finland. His latest canvases create slightly altered views of reality – another dimension that is similar but not quite our own. He paints from the point of view of a tourist – fresh, as though seeing things for the first time. The subjects are places and things in our day to day surroundings, things we often take for granted and pay little or no attention to. By adding emotional components through line and color, he gives us a hint of a story, maybe yours, that resides in the shadows.

“Through my  hands, head, and heart and your appreciation of my art, I aim to bring a sense of beauty, mystery and joy into the world.”